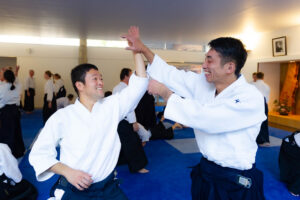 Prior to starting Aikido, Koichiro spent time in the United States and in France; giving him many insights into operating in multicultural environments such as Aikido Centraal where we have students from all over Europe and the world. Koichiro shares with us an insider’s view of this Japanese martial art.

Koichiro relocated to The Hague in August 2015 and has since become a valued instructor at Aikido Centraal. He worked as a teacher at The Hague-Rotterdam Japanese Saturday School for 2 years and he taught Aikido at one of international schools in the Hague for 2 years.

Koichiro was honored to become one of Deshi of Seishiro Endo Shihan (8th Dan) in August 2017. He has been developing the sense of center (natural) force in contrast with muscle force. He highlights why both physical and mental practice are needed throughout his practice and classes.